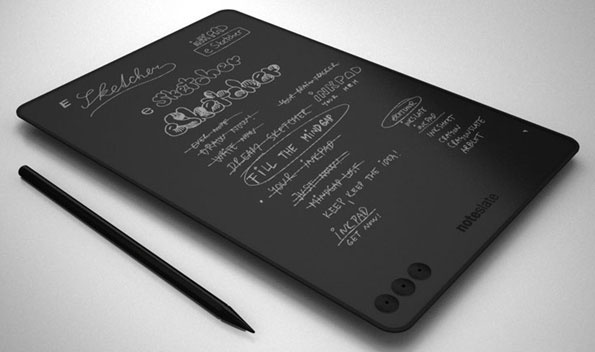 Writing in the e-notebook and transferring data on the PC with the option for keyword search.

It is new technology, in particular, that proves writing by hand still hasn’t gone out of fashion. Just think about this superior advantage used by Samsung to advertise their Galaxy Note 4.

Handwriting has barely started settling in the world of technology. Currently, digital pens and notebooks are the thing of the day.

Digital pens memorize every character written in a special mobile application. Most new models have an embedded recorder (up to 2 GB), which enables recording very large volumes of text. This text can be uploaded to a computer and you can search for specific passages by keyword.

Diotek, for example, will soon place a new generation digital pen on the market. It will have an embedded handwriting recognition system.

The project consists of collecting information about different people’s handwriting, in order to easily develop a handwriting recognition system, and making it available for Samsung and other devices, with the option of handwritten text recognition.

People from over 28 countries were involved in the collection of those handwriting databases, and one of the conditions was that they had to write in their mother tongue during the data collection stage.

DioPen is the standard for intuitive and emotional input interface that supports a variety of handwriting styles (cursive, print and a mix of cursive/print) with extreme accuracy.

The model is equipped with a mobile keyboard and a cable for direct transfer of text to a mobile device or a desktop. Currently it is considered to be the best handwriting recognition device – experts have spent over a decade improving and developing it. It supports over 90 languages and in addition to recognizing a variety of handwriting types, it also recognizes cursive.

An additional software module is used for the recognition of Chinese/Hanja/Japanese/other Asian languages, including Thai, Malayan, Indonesian and Arabian/Farsi, Vietnamese and Tagalog.

The pen can function in any field, especially in the field of translation.

The digital pen can be applied in various areas – education, media, business administration, etc. But this seemingly pretentious technological caprice is quite essential in the field of translation services.

As we already noted, digital pens belong to the category of mobile computers, they have a capacity of embedded handwritings recognized by the system and you can write whole pages, quickly download them to your computer, and search by keyword.

These features make it the best tool for translators, when it comes to simultaneous translation and interpretation during conferences, seminars, briefings, etc.

On the one hand, handwriting is much faster, preventing you from missing  any important details of the information.

On the other hand, the technological options, which allow fast and easy digital transfer of the text, create great convenience and provide time advantage for the translator.

mitraHandwriting Comes Back Into Fashion Thanks To Technology10.26.2015