English language is constantly evolving. But while historical language changes are the result of the Vikings invasion or the interactions with the Celts, modern changes are to some extent taking place thanks to the Internet.

Since social networks made online culture more accessible and significantly expanded their scope, the development of online communication has been growing further at a frantic pace.

We are now looking at some online words which, according to the Oxford Dictionary, have already become mainstream. 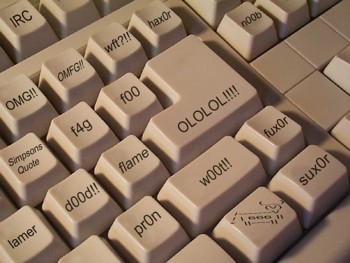 Noun: Comes from the word “newbie”. It means “unexperienced person”. The word has been used by Vietnam veterans, and was subsequently adopted by PC gamers in the 80’s and 90’s as a viable means of distinguishing “elite” from less qualified members of online communities.

Noun: Someone who deliberately seeks to provoke or upset other people for his or her own pleasure. The word “troll” originally refers to a character from the Norse mythology, who is considered a monstrous and unsightly creature. Currently, the online use of this word has reached mass proportions.

Verb: Shows lack of approval of a certain status or link.

The conventional English word for not liking something or someone is “dislike”.

Verb: Sending a text message with sexual content over your mobile device. A combination between the words “sex” and “text”. This word comes into general use after sending text messages containing intimate conversations of sexual nature.

Noun: A photograph, a self-portrait. Usually, someone takes a selfie with a mobile phone and then shares it on social networks. Modern phones even have a special feature for taking selfies. The word comes from “self” – “me”.

Would you share any other words you use online?